Zambia is a landlocked country, bordered by countries such as; Namibia, Malawi, Zimbabwe, Botswana, Democratic Republic of Congo, Angola, Tanzania, and Mozambique.

Zambia holds a population slightly over 18 million people, Zambia is becoming one of the popular destinations in Africa and in the world at large, this country definitely has so much to offer.

Zambia birthed the first-ever walking safari – Zambia is the best in Africa, undeniably, when it comes to walking safaris, this concept of walking safaris was first introduced in Luangwa Valley, which is named ‘The Valley of the Leopard’, as spotting a Leopard is common.

Zambia holds one of the Seven Natural Wonders of the World – Yes! The Mighty Victoria Falls, the largest waterfalls in the world. Zambia boasts of its waterfalls that it shares with Zimbabwe, discovered by a European missionary in 1855, David Livingstone.

Friendly and Warm people – You are guaranteed, to never feel like a stranger in the midst of Zambians, as they are ever welcoming and caring to see your stay a fun and peaceful package.

Zambia has Great Lakes known in Africa and to the World – Among the many water bodies, Zambia holds the famous few in the World, each special in its own way; Lake Tanganyika, Lake Mweru, Lake Bangweulu, and Lake Mweru Wantipa.

Zambia is the ‘Real Africa’ – It gives you a raw, untamed nature, from the Walking Safaris to the plentiful water bodies, the vegetation, to its colorful and joyous people, the sounds of the wilderness, to the authentic lodges, camps and hotels, not forgetting the never-ending concentration of animals big and small (the big five too), to the fertile land and soils, and the adventurous and fun activities (both land and water). Can it get any more real than this?

Lusaka city - the Capital city of Zambia is known to have several activities that take place, these activities may differ from the typical tourist activities found in the other tourist cities and locations, in that they focus both on the visitors and local residents of the city. These activities include:

Livingstone City - the tourist capital was named after a Scottish explorer, Dr. David Livingstone, he was the first European to see the Wonderous Victoria Falls that Livingstone displays, which happens to be the town’s topmost attraction, around November of 1855, Livingstone were overwhelmed by the sight he was graced with and all he could say was, “It has never been seen before by European eyes, but scene so beautiful it must have been gazed upon by angels in their flight.” And this is where the activity called Helicopter Flight also known as the Flight of Angels.

Victoria Falls is the home of the world’s adventure activities and this city has a lot of adventurous activities and experiences to offer, from the cultural and historical places, the water rafts, canoeing, the famous bungee jumping, wildlife watching, game drives in the Mosi oa Tunya National Park and walks, fishing, helicopter flights, Zambezi River Cruise and many others just to mention a few If you are an adventure lover – what are you waiting for Contact Absolute Zambia Safaris Now for your next adventure holiday.

Kitwe town - is the center of Copperbelt province in Zambia, as it connects most towns within the Copperbelt. The city is the main establishment of Zambia’s finest and industrial mines, being a developed city, it has shopping malls, a cinema, and excursion places.

For Visitors wanting to learn about mining, a visit to one of the biggest open-pit mines in the world, ‘The Nchanga Open Pit Mine’ can always be arranged.

Chipata City – Newly declared as a city is in the Eastern Part of Zambia, approximately 130 kilometers from one of the best Tourist attractions (Reserve) in Africa The South Luangwa National Park in Mfuwe town. Chipata holds various international and local hotels and restaurants, the likes of Protea Hotel, Luangwa House, Cross Roads Lodge, but most exciting are the traditional ceremonies (Colourful Annual festivals) that take place here. These are two of Zambia’s biggest traditional celebrations of culture; The Nc’wala Ceremony of the Ngoni people and the Kulamba of the Chewa people as these ceremonies is not only celebrated by Zambian but also by neighboring countries such as Malawi, Mozambique, etc.

Zambia adopted its name from the Great River, the Zambezi, which has its source in the Ikelengi hills in mwinulunga. The Zambezi comes from a Lunda expression ‘Nzambi enzi’ which means ‘God come’, and hence the connection to Zambia which interprets ‘Land of God’.

Over the years, Zambia has developed and still developing, also with urbanization and western influence which has brought good to the country. Even so, Zambian people still preserve their culture, customs, and traditions, and always find the time to celebrate its annual traditional ceremonies, some of these ceremonies are really small and only recognized by the villages in a specific area, but still, they are of importance to Zambians at large.

Zambia has more than 20 traditional ceremonies, that continue to promote and preserve culture, and this is an inheritance that keeps being passed on from generation to generation. However, certain lifestyles and customs have been mixed with western culture as years progress, but strongly there are rulers and traditional advisors helping to preserve culture and tradition so that it is never forgotten.

These ceremonies are open to visitors, allowing them to watch and learn the significance of ancient times and history passed on from generation to generation. These include;

The Kulamba – This Traditional Ceremony is for the Chewa people of Malawi, Mozambique, and Zambia is held every last Saturday of the Month of August in Katete, the purpose of the ceremony is to pay homage to the Kalonga Gawa Undi. The Kulamba Ceremony is custodian to one of Zambia’s unique cultural practices called the Gule Wa Mkulu which has been recognized by UNESCO as “artifacts of intangible heritage”.

Likumbi Lyamize – This is a traditional ceremony of the Luvale people, in the Zambezi district, North-western Province. This ceremony takes place between the months of July and August, the name Likumbi Lya Mize originates from the word Mize meaning a small shrub where the senior Chief Ndungu lived first, before building his palace. In 1956, when the palace was completed, the senior Chief Ndungu decided to hold a celebration for this achievement, and his subjects named the festival as ‘Likumbi Lya Mize’. Because of the Makishi Masquerade that is at the ceremony, recognition by UNESCO (United Nations Educational Scientific and Cultural Organisation) as a world heritage ceremony was drawn.

N’cwala – This is a traditional ceremony practiced by the Ngoni people, in the Eastern of Zambia. The N’cwala ceremony takes place in February just when the month is coming to an end, people from all corners of Zambia gather to celebrate together, this ceremony takes place at Mtenguleni, to give thanksgiving for the first harvest of the season. It has been a ceremony practiced from Ngoni ancestors to the Ngoni people alive today. When the rains begin, usually between October and December, for the Ngonis it means a new year has begun, seeds are planted and when the time to harvest, a sacramental meal is prepared and offered to the Paramount Chief Mpezeni, god and the ancestors.

Kuomboka – This traditional ceremony for the Lozi speaking people of Western Province which takes place in Mongu by Paramount Chief Litunga. The Ceremony takes place at the end of every rainy season when the upper Zambezi River plains flood mostly between March and May. Kuomboka is the movement of people from the flooded plains to the higher land. The ceremony marks the movement of the king (Paramount Chief Litunga) from the palace in the flood plains to the palace on the higher land

This includes visiting the local village that is located in remote places to learn about a typical day to day village life this can be a day visit or an overnight for a complete experience which will include spending a night in a house made from mud and straw, and thatched huts. You will also get to enjoy how the villagers find means to entertain themselves by telling stories, singing, composing songs and traditional dancing. Children and teens like to play games, among which is the common soccer game played almost anywhere in the world today.

Excursion to local Schools, local Clinics and a local market.

The South Luangwa Animal Paradise lies in the valley of the Luangwa river, making it not only a home for the above-mentioned animals but a haven for more than 60 mammal species and over 400 species of birds. The Luangwa river itself is the heart of the National Park, it displays a splendid view of lagoons, vegetation, and scrubs along the banks.

The Park provides a wide range of accommodation; lodges and camps, from exquisite luxurious ones to comfortable bush African ones. All, not hidden to the views of either the river, valley, or wildlife at large. These lodges and camps have warm hospitality service of people, right from the reception to departure as hospitality is the Zambia special brand.

Game viewing in South Luangwa National Park is the top attraction and must do, experience the real sensation of nature and Africa with The Unique Walking Safari and the 4x4 Game Drives.

Experience the African bush and spot wildlife in their natural habitat in a unique way with a Zambian walking Safari. During the walking safari, you will concentrate much on things that can’t do while on a Game Drive Safari, such as tracking animals like Giraffes, Elephants, wildebeest, even big cats and many more.

A game drive is an adventure taken to view and explore wildlife, usually in the comfort of a 4×4 vehicle. This one of South Luangwa’s popular game activities, as it allows visitors to see more games in their natural habitat.

Game Drives are categorized into two:

Boat Cruise (Seasonal Boating)- This is an amazing treat to clients in the Emerald Season, from end December/January to around April. Explore the river with game viewing and birding and this is done by only one or two safari camps in South Luangwa National Park.

You can learn more about the experience by visiting our partners Animals Around The Globe via the blog https://bit.ly/2R3gBDV 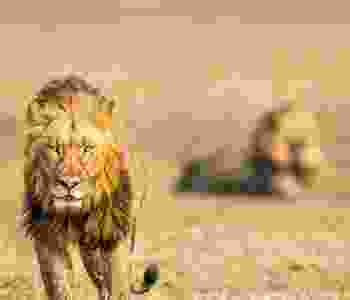 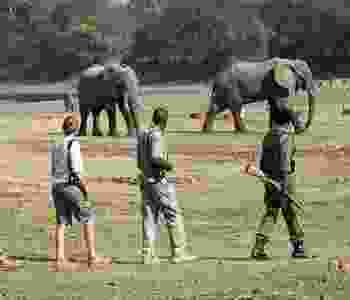 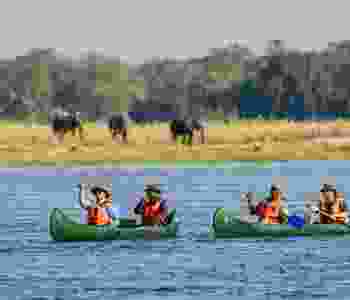 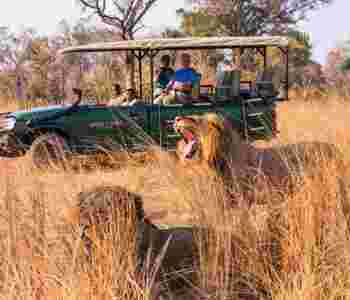 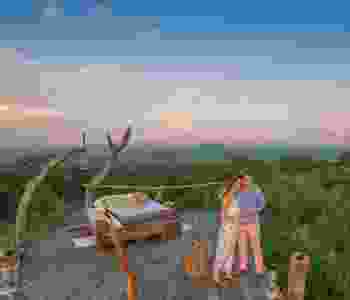 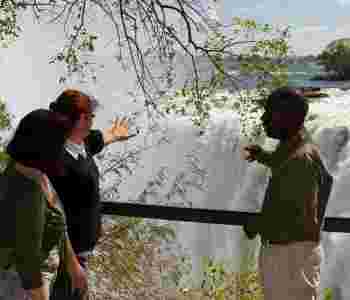 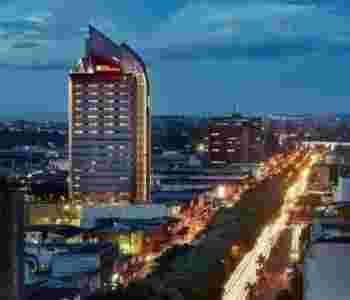 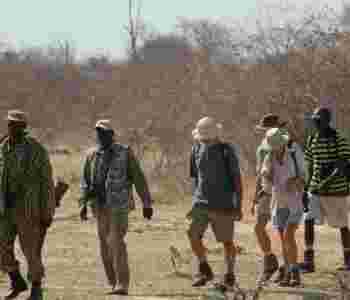 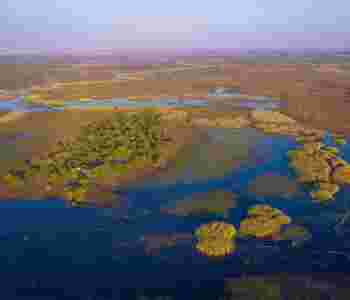